NDT services are essential for ensuring the safety and efficiency of assets and materials. To assist organizations in maintaining equipment and components, Buffalo Inspection Services offers a range of NDT services across Western Canada. Our technicians use both traditional and advanced technology to provide the most reliable NDT services and inspections. As a leader in non-destructive testing, Buffalo is well-known for providing high-quality pipeline, oil and gas, and mining inspections. However, we also offer many other NDT services that you may not be aware of. 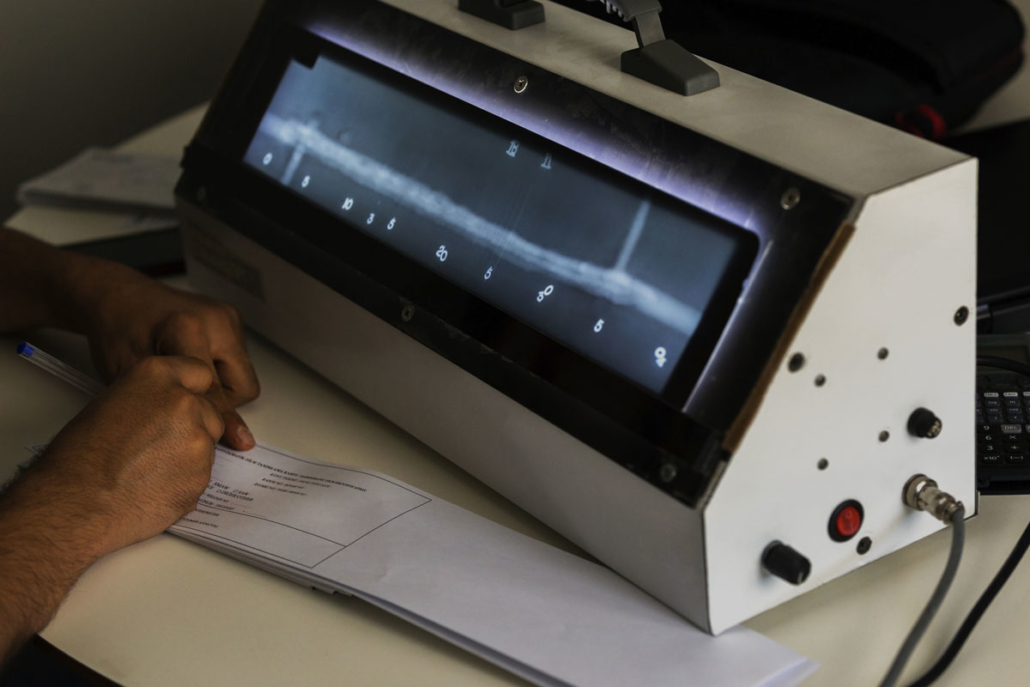 As you can see, film digitization provides numerous advantages and a positive return on investment. Therefore, this NDT service is beneficial for any inspection program. 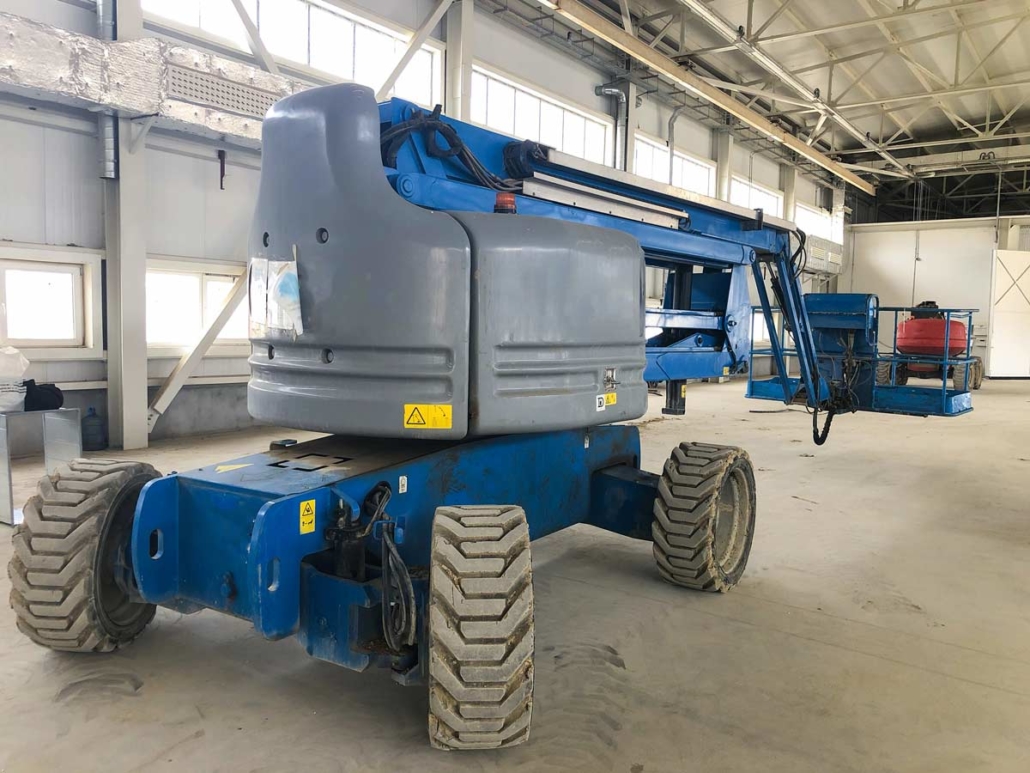 Buffalo’s NDT services also include lifting equipment inspections. The highly trained and experienced NDT technicians at Buffalo are capable of performing inspections and testing on various types of lifting and hoisting equipment. This includes:

Hoisting and lifting equipment is consistently exposed to stress and fatigue. Therefore, NDT inspection is essential for safe and uninterrupted operation. Buffalo uses both advanced and traditional NDT methods to ensure accurate inspections and reliable results for the safe and efficient use of lifting equipment. 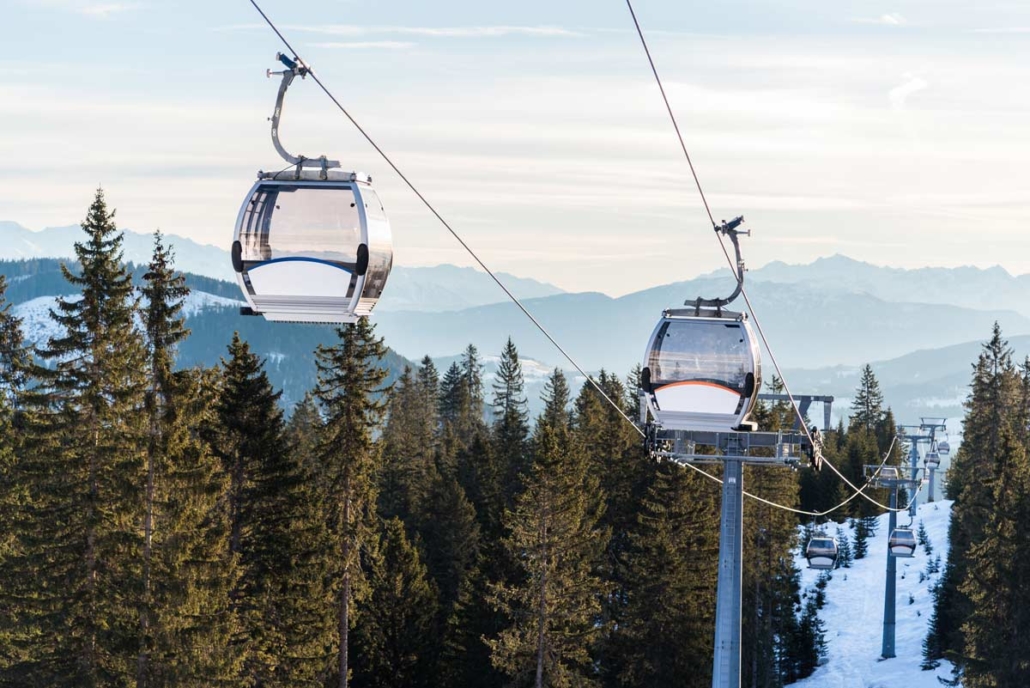 As a result of their limited service life, wire ropes require regular inspection. In many cases, this ensures the health and safety of both employees and the public. To help maintain the safety of wire ropes, Buffalo’s NDT services include wire rope inspections.

To provide reliable testing, Buffalo’s NDT technicians use advanced Magnetic Flux Leakage Detection Technology. This technology not only allows for a reliable estimate of the condition of wire ropes but also an estimate of their remaining lifespan.

Buffalo technicians can provide inspections of wire ropes ranging in size from 10mm to 60mm in diameter.

At Buffalo, we inspect the following types of wire ropes: 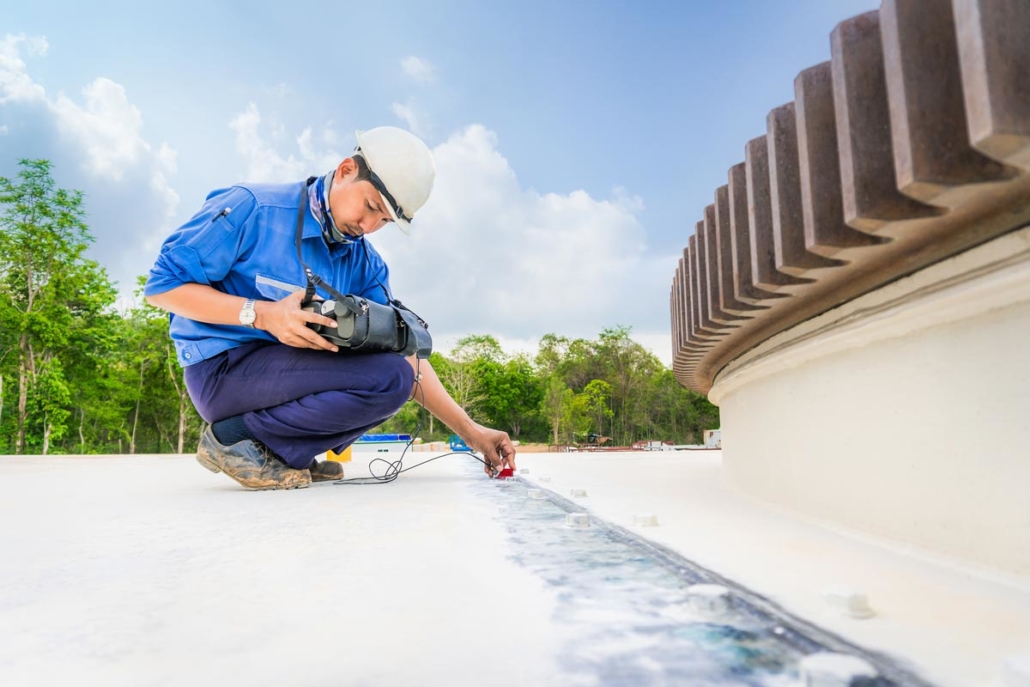 Buffalo Inspection Services is dedicated to providing the most reliable and cost-effective NDT services. Therefore, we use the most advanced NDT technology and tools to help increase productivity and offer high-quality inspections.

Buffalo’s ultrasonic and advanced surface inspection techniques and capabilities include:

In addition to the NDT services discussed above, Buffalo provides its partners with access to advanced real-time reporting systems.

To serve our clients better, Buffalo offers two custom NDT software programs – BUFFALO CONNECT and BUFFALO CONNEX. These reporting tools are unlike anything offered by other NDT companies in Western Canada. These systems offer numerous benefits and unmatched value and are, therefore, highly sought after.

BUFFALO CONNECT is Buffalo’s client Extranet Portal. This portal allows our clients to:

Above all, BUFFALO CONNECT provides a level of transparency that is not commonly seen in the non-destructive testing industry. This transparency allows us to create open, honest and mutually-beneficial partnerships.

Above all, CONNEX ensures real-time code compliance and provides technicians with the ability to integrate specific reporting requirements. As a result, Buffalo’s reporting meets the highest standards and is extremely consistent.

The NDT services above are just the tip of the iceberg – Buffalo offers an extensive range of NDT/NDE inspection services to ensure the safety, reliability and longevity of a wide range of materials and assets.

With more than 40 years of experience, 60 inspection crews and 28 locations throughout Western Canada (including satellite locations), Buffalo is able to provide fast, convenient and accurate inspections.

Above all, our expert NDT technicians foster a culture of safety, transparency and innovation. As a result, you will benefit from cost-effective, honest and high-quality service. 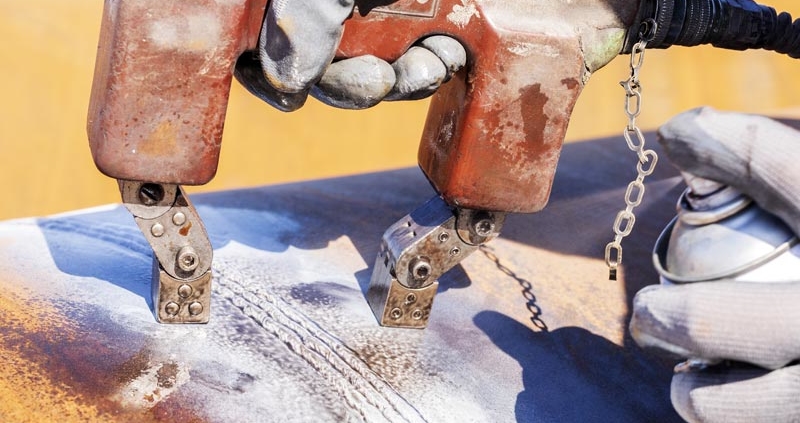 Not even the most advanced non-destructive testing (NDT) methods, including Magnetic Particle Inspection (MPI), are foolproof. Regardless of which NDT technique is used to evaluate a material, not all defects will be found. That being said, experienced NDT technicians can get extremely accurate results when they are aware of conditions that may impact the detection of flaws. For instance, a significant factor that can impact the probability of detection (POD) when using Magnetic Particle Inspection, or MPI testing, is fatigue.

What is Magnetic Particle Inspection?

Magnetic Particle Inspection is a type of non-destructive testing. It is used to detect flaws on the surface or near the surface of ferromagnetic materials, such as iron and steel.

MPI testing is especially useful for detecting minor imperfections. This includes pores, cracks and other discontinuities. As a result, this NDT method is often used in welding inspections.

The benefits of Magnetic Particle Inspection include quick testing and immediate results. As well, this NDT method has the ability to detect flaws in materials with irregular shapes. Above all, MPI testing provides great defect resolution.

MPI testing can be conducted using several different techniques. One of the most common types of Magnetic Particle Inspection is the Yoke technique. This technique uses a portable hand-held device with an AC/DC or permanent Yoke to magnetize a material. The Yoke technique is versatile and relatively inexpensive to employ. 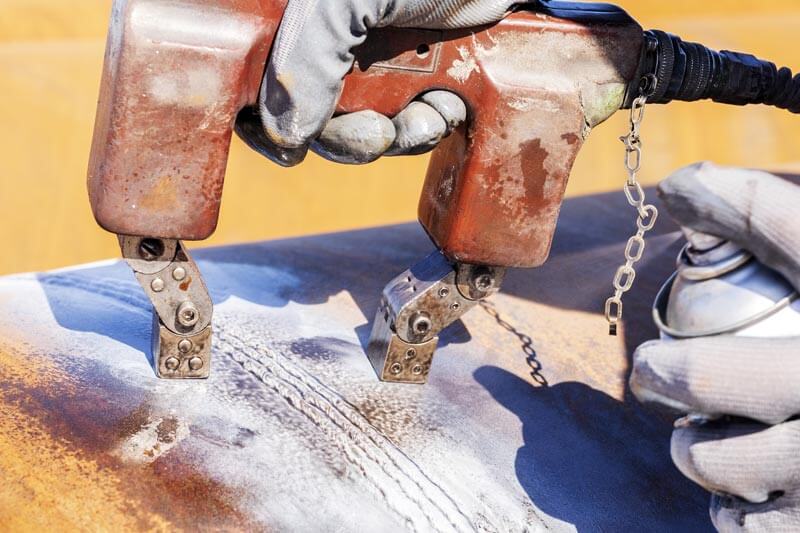 How is the MPI test carried out?

Detecting indications is straightforward in some cases. However, the probability of detection using MPI testing can become more difficult if a material has experienced fatigue.

How does fatigue impact the POD for Magnetic Particle Inspection?

Work hardening and fatigue are caused by physical processes and deformations imposed on a metal. For example:

As mild steel experiences work hardening and fatigue, the magnetic properties of the steel change. Let’s take a look at the kinds of changes you can expect.

Property Changes Due to Fatigue

When discussing Permeability, it’s important to note that Permeability (µ) is a ratio – a function of B and H. That is, B = µH, where B = flux density in Gauss and H = magnetizing force in Oersteds. So, when μ decreases, the amount of magnetizing force remains the same and the codes still mandate a 30 Oersted value for B. H for AC yokes is fixed. As a result, there is only physical spacing to reduce magnetizing force.

This being said, it is important to be cognizant of the variables in order to get a result and maintain probability of Detection. B is generally overstated in the codes to a value that is three times that necessary. This results in spurious indications and a low probability of detection for Yoke MPI (i.e. around 44%).

To further illustrate the extent to which fatigue affects permeability, we’ve provided a visual representation below. What you’ll notice in this diagram is that the permeability of a cracked or fatigued material is approximately 30% less than the material in its original state. 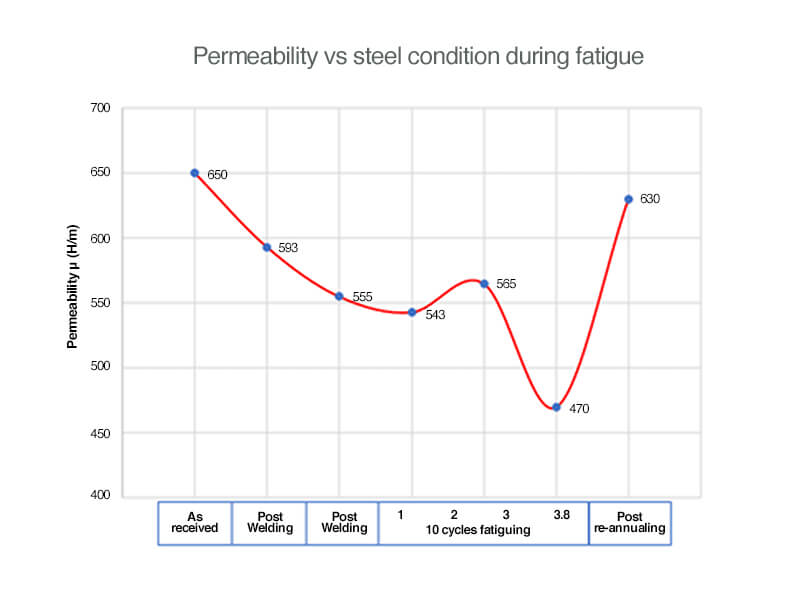 When it comes to Magnetic Particle Inspection, changes in permeability have the most significant impact on POD.

But how does permeability impact the probability of detection when using MPI testing? Let’s take a look.

Decreased permeability results in a lower probability of detection when using Magnetic Particle Inspection. More specifically, POD decreases because MPI testing using a permanent magnet (like that used with the permanent Yoke technique) does not allow the NDT technician to control magnetic current. As a result, the inspector may reach saturation levels, even though the material is not magnetic enough to accurately detect flaws. Overall, decreased permeability makes it difficult to effectively uncover indications, especially those that are not large or surface breaking.

The graph below demonstrates the relationship between permeability and induced magnetism based on the strength of the external magnetic field that is applied. 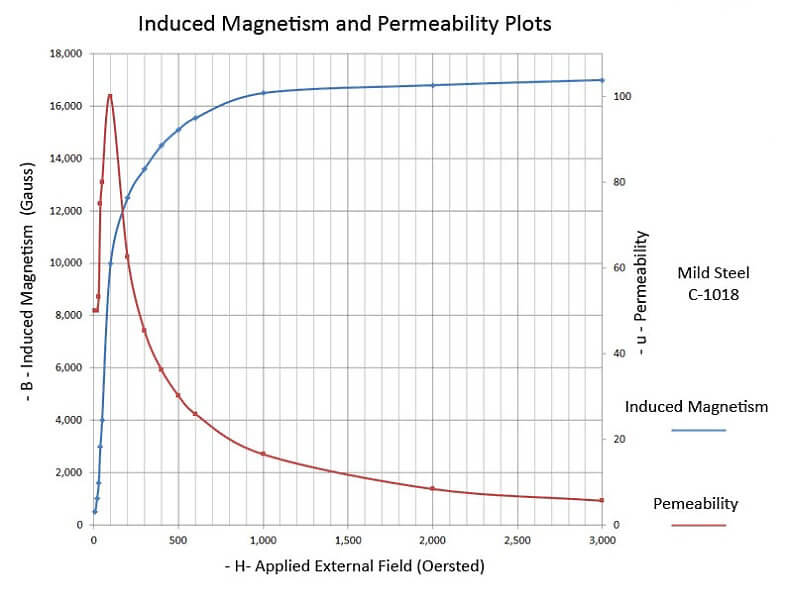 In addition, welded and fatigued materials exhibit variances in permeability. In other words, different areas of the material (e.g. parent material, heat-affected zone, weld) will have different permeability values. Again, because it is a one-size-fits-all method, the AC/DC or permanent Yoke technique does not lend well to testing materials with varying permeability. However, there are ways to improve the probability of detection when using MPI testing.

How to increase the probability of detection with MPI Testing

Several common techniques are used to induce magnetization when employing Magnetic Particle Inspection. These include:

Of these MPI testing techniques, the ones that allow for the most control over magnetic current will have the highest probability of detection for fatigued materials.

In addition to employing a more reliable technique when fatigue is present, NDT technicians who are aware of the impacts of fatigue and changes in permeability can use this knowledge to offer better results in the field. Leading NDT companies, like Buffalo Inspections, employ knowledgeable technicians who are familiar with the implications of magnetic physics and can ensure the best probability of detection.

Get the Most Reliable NDT Results with Buffalo Inspections